Just a short post today. Woke up fairly early and was soon on the road. There were very impressive icicles on the church next to my motel: 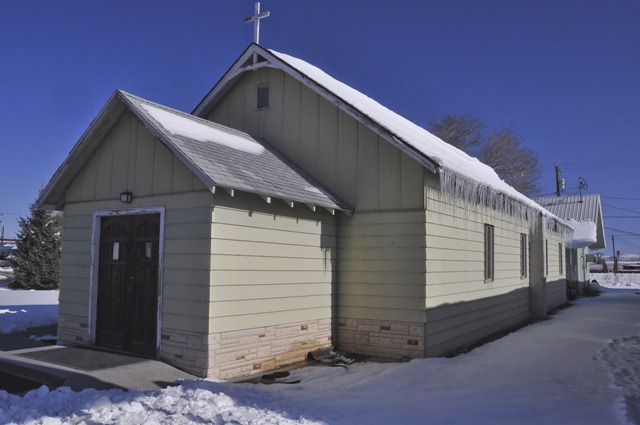 Had a quick scout around town for trains but apart from one sitting in the loop, nothing was happening. The one in the loop looked like it wasn't going anywhere soon. I went up to a good lookout spot to see if anything was approaching, but the only thing I saw were some UP maintenance vehicles on the track; great, no trains any time soon.

By now the transmission had almost warmed up and stopped making raunching noises and bucking on every gear change, so I ventured out onto the freeway.

Two hours later I still hadn't passed any trains, but had seen some more track workers out on the rails. They were really out in force today. I did however pass a very photogenic run down old barn, so took the next off ramp and went back to photograph it. 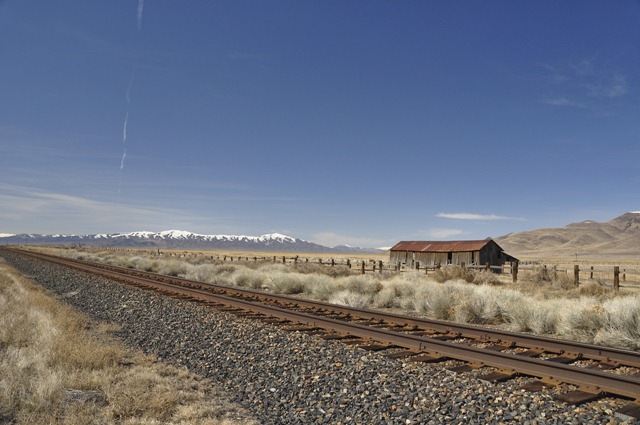 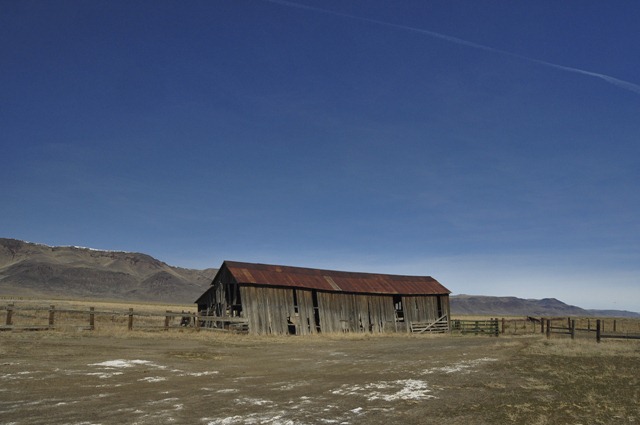 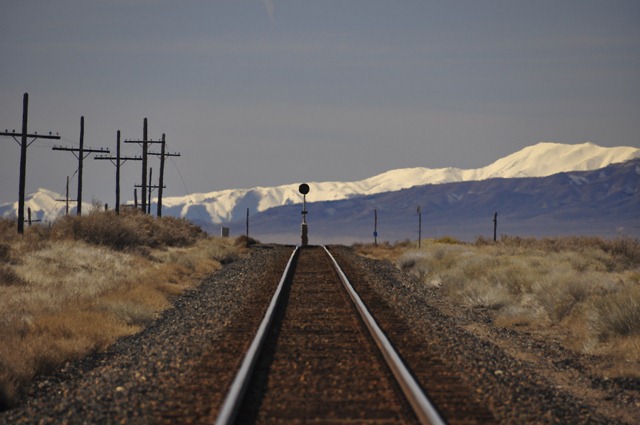 I really wanted a train to come past, even had the perfect shot lined up, so I parked where I could see both ways and waited for a bit. 10 minutes later guess what rolled into view but another #$*@ track maintenance vehicle. Since it's only single track here there wouldn't be any trains for quite a while — when the dispatchers give track permission to the hirailers, they lock up the entire section of track so that nothing else can occupy it. 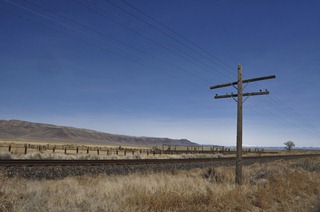 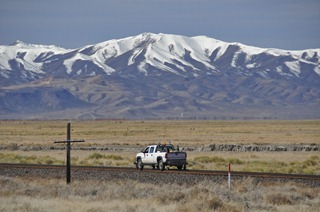 So I gave up and went back on the freeway. Passing through Elko and Winnemuca I saw a few trains, but all heading the other direction. Wherever the WBs were today they were nowhere near me!

Arrived in Reno around 3pm, and set about visiting some model train shops. The first one had a reasonable selection of rolling stock and a few locos, but not many items had prices which was frustrating. They didn't have too many locos; nothing I was interested in anyway. I bought a few wagons and continued on to the next shop.

Next train shop was way worse; all their N scale items were locked away under the counter, and with no prices except a few "discount" items. They had an excellent selection of HO locos, but their N scale stuff was pitiful. Left without buying anything.

Since I was still in Reno I set about trying to buy a replacement Peek. RadioShack gave me a weird answer about how they have to "roam" in Reno and so Peek won't sell them here. I suspected that was a load of rubbish, but obviously they didn't have any to sell me. Next stop was Office Max who didn't have anything; the sales droid there suggested they were too "antiquated" for "high tech" stores, and maybe I should try Walmart or Target. Went to Target, they didn't have anything, wasn't even listed on their inventory. Went to Best Buy, nope, nothing either. You'd think for a little $20 device at least someone would carry it!? And since I'd originally bought mine from RadioShack, I thought maybe RadioShack might stock them. Nope.

Gave up and drove to Tahoe Vista for the only affordable accommodation this side of the Sierras. So now I'm in California, ready to hit Donner Pass in the morning and see some trains! Walked to Nevada for dinner (it's about 3 houses away) — a beef quesadilla at the local casino. Enough to feed two people, for less than $10. At first I was against casinos, but then I realised that they have really cheap and quite decent meals. They're probably subsidised by gambling takings, which is fine by me!

Watching the weather channel there is a big snow storm predicted for tomorrow on Donner Pass, up to a foot of snow which is just a dusting by Donner standards. I've heard stories of signal maintainers on the railroad who have gone into a signals cabinet to fix something, and come out an hour later to find an extra couple of feet of snow! While discussing the news there was a very impressive video of three snow plow trucks working in a V formation to clear the freeway. Looked like a very efficient operation.

Next couple of days will be spent railfanning Donner Pass again, hopefully if I'm very lucky I'll get to see the "winterized" locos in operation with the flangers and spreaders. With lots of fresh snow expected I imagine they'll be out fairly frequently keeping the rail line open. And then on Sunday, just 3 days time, I'll be boarding my plane and retuning to Chch.