My railfan tour along the MRL continues. Another night in a Motel 6, and another vague "never again" promise. Down at the Helena yard it was pretty quiet, although I noticed a 6-pack of classic EMD power sitting waiting. The MRL staff here are very used to suspicious looking cars sitting at the crossing for hours at a time, in fact most times I visited there was someone or other sitting in their car watching the happenings. I think I was a bit unusual in that I, you know, got out of my car. 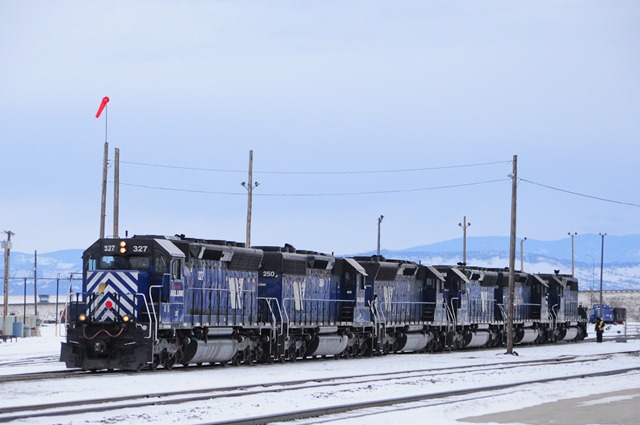 By my count there were three SD45s and three SD40s. Not a bad lash up at all! They sat around for a bit and then after half an hour coupled onto their train and they were off. I'm trying to work out how I can smuggle one of these SD45s out of the country. 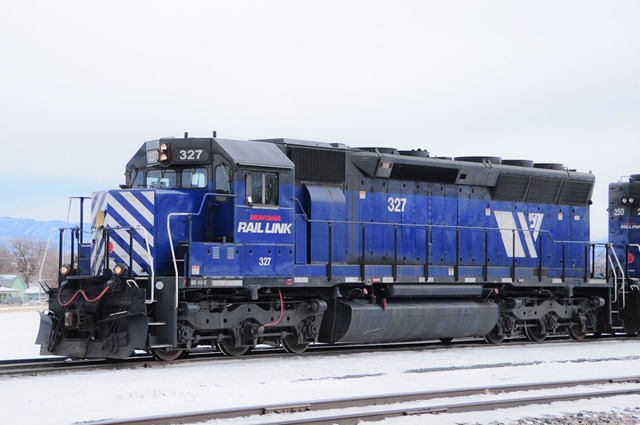 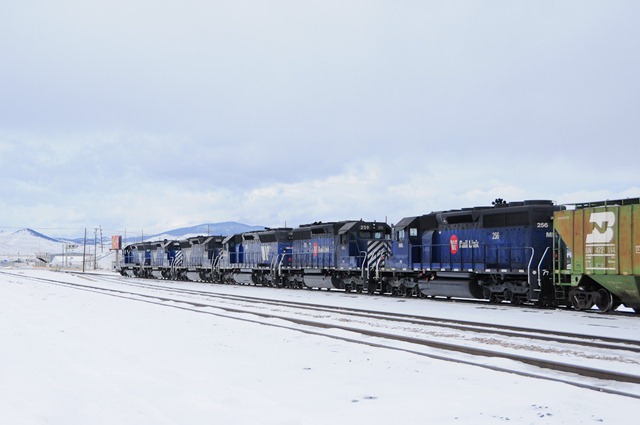 I tried to chase them up the hill but with so many horses on the front it was an impossible task and he easily beat me. I parked the car part way up the hill where I could see all the way down to Helena and read my book for a while. Two hours later (ulgh) there was some activity and I caught "Helper 2" coming flying down off the hill. Line speed here is 60mph and they more or less do that where possible! 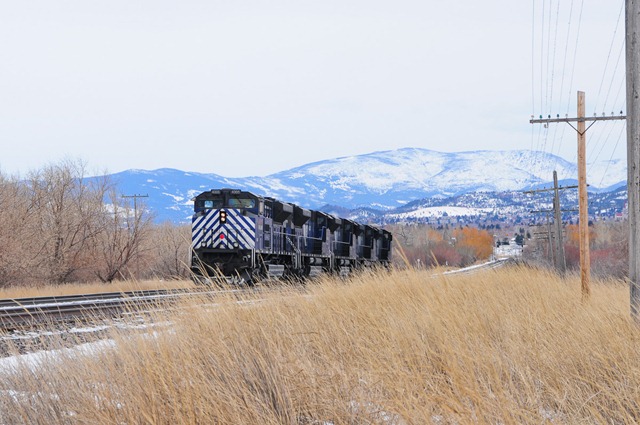 Helper 2 was headed back to the Helena yard so I followed it down where it parked in front of the next train and sat. I went down and snapped some shots. Interesting fact about the Helena helper packs; the front loco (visible in the photo above) is always the cleanest, and the rear loco (in photo below) is always the filthiest, as this is the direction they run through the tunnel, and it's only the uphill (west bound) trains that need help. 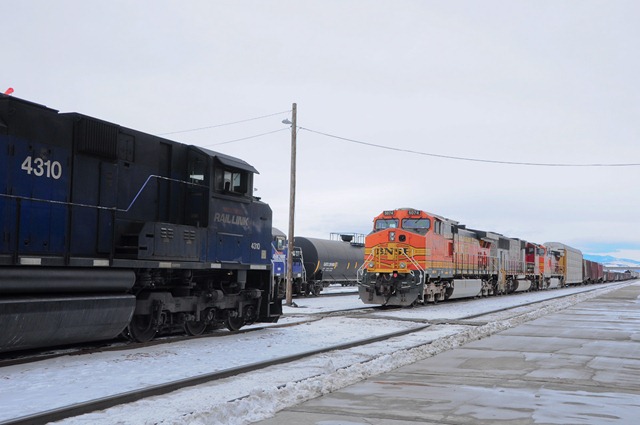 Here you can see the effect of tunnel fumes on the locos by the even graduation of shades of gunge, from nearly clean at front, to uniform flat matt black at rear. 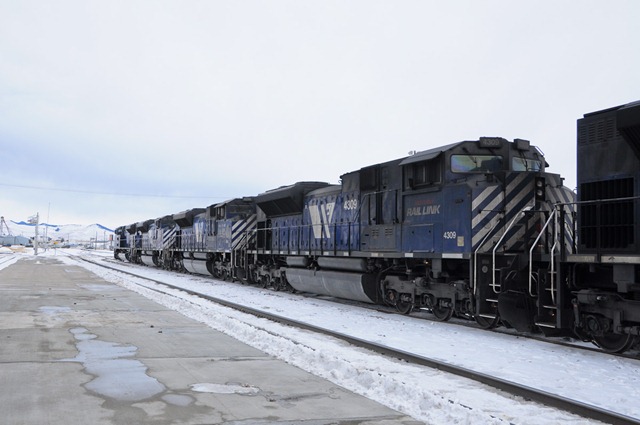 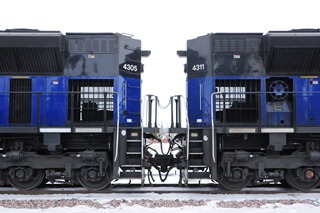 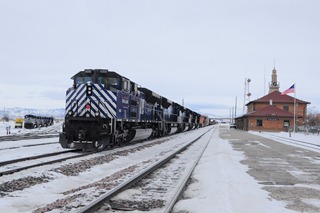 Ends of the front two SD70ACe's (the cleanest) / Helper 1, Helper 2, and the Helena station building.

Since the next train was obviously just about to leave I waited round for a bit. Two hours later it finally left! Thank goodness for my Kindle to keep me amused. And here comes the train roaring up the now familiar hill. 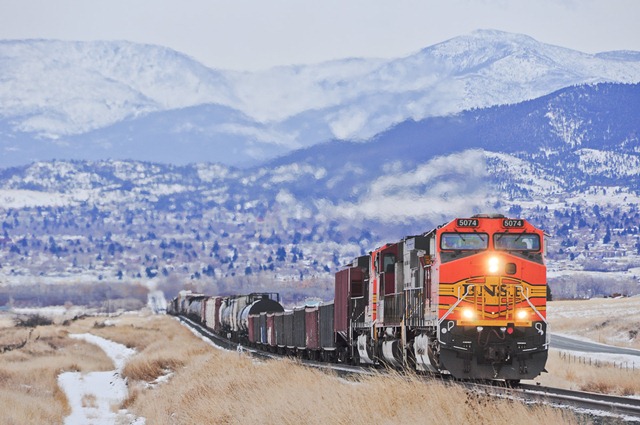 I left it at this point, as it was now 3:30pm and well and truly time to head to Missoula.

Earlier I'd been reading that the parts of state congress were trying to reverse the medicinal marijuana bill. "Huh?" I thought. "Montana has legalised marijuana for medical use? How bold of them." The previous day I'd drive by a large commercial hot house and noticed something on the fence about "strictly legal". This time I slowed down and had a good look… yes, on the road over Mullan Pass there is a medicinal marijuana growing facility! It was full of "tomato plants" and heat lamps and there were quite a few people inside too. There was also a reasonable looking security fence around the premises. 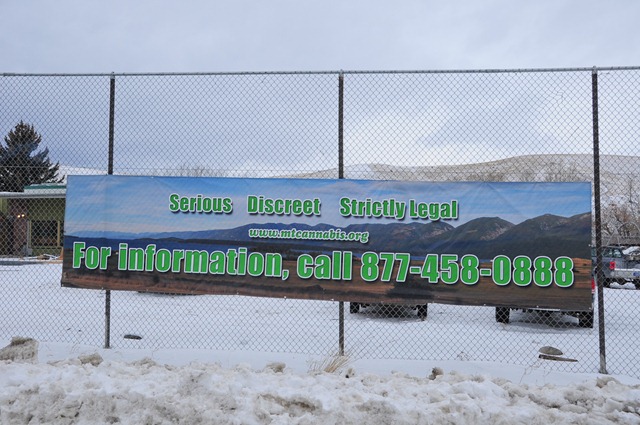 So there you are. I saw a commercial marijuana facility!

The drive to Missoula wasn't especially amazing for the most part, but the final stretch passes through a impressive set of canyons, however it was getting dark and I didn't feel like messing with off ramps and so forth to get shots of trains that I would probably have to wait several hours for! Ahh the curse of the railfan.

Checked into the Thunderbird Motel which was well run and very clean, the rooms even had a nice smell to them. Price wasn't that cheap at $55 but the rooms were huge and they had some neat neon lighting going on. This isn't my photo, but you can see their very impressive sign. They had blue strip lighting around all the banisters etc which was pretty cool too. 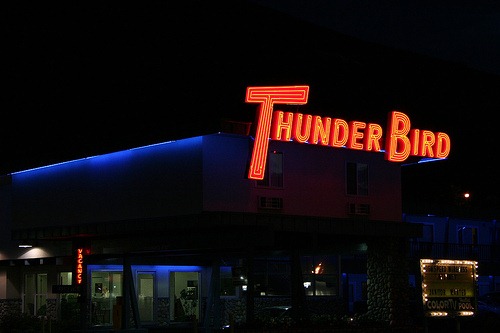 Pizza Hutt for dinner, and then off to find a tape measure to complete a suit hire form for Sammi's wedding, since the original suit hire shop has possibly come to an untimely end. It was starting to snow; not especially heavy, but it was slowly starting to settle. It was nice walking back to the motel in the cool breeze and snow.