Woke up to another lovely gray day here in Missoula. Fantastic… and all the snow was melting too, so a pretty bad combination for any kind of photography. Tried to hit the road fairly promptly to see if the Day Gas Local was around. Went down to the yards and saw endless white tank wagons in the yard and at the Exxon facility being emptied, so concluded that the local had already been and gone. Oh well. The remote shunter was doing a bit of work though, moving around some of those gas tanks… 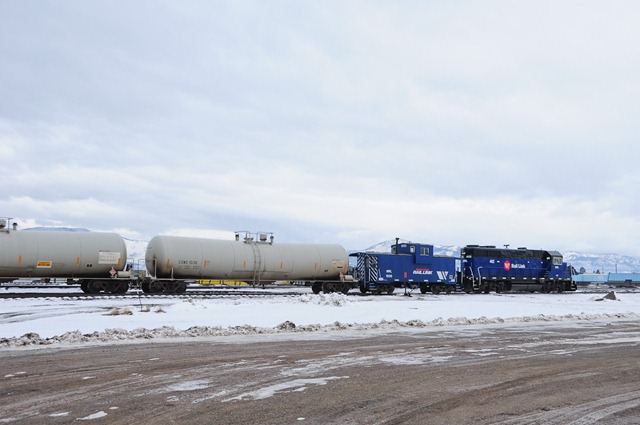 … you can see how depressing the weather was!

I sat and waited for a bit while a massive earthworm slowly moved around the yard and then followed it when it took off. Caught it and barely missed it a few times, and then had to do some frustrating doubling back when it had to stop for a work train.

At Frenchtown I caught the two passing: 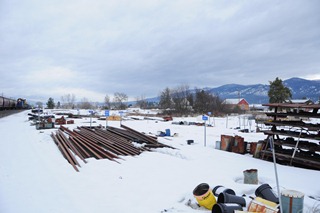 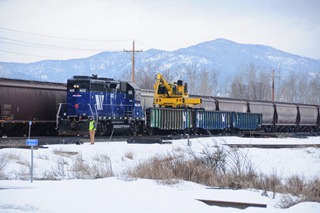 I noticed that all the ties, frog rails, spikes, etc were labelled at the yard here; had to wonder if that's so when there is a foot of snow everywhere they know where to dig!

Down the road at Lothrop there was another meeting. I zoomed in and was waiting for my train to move, before I realised that this wasn't it. Soon a hot intermodal came flying through: 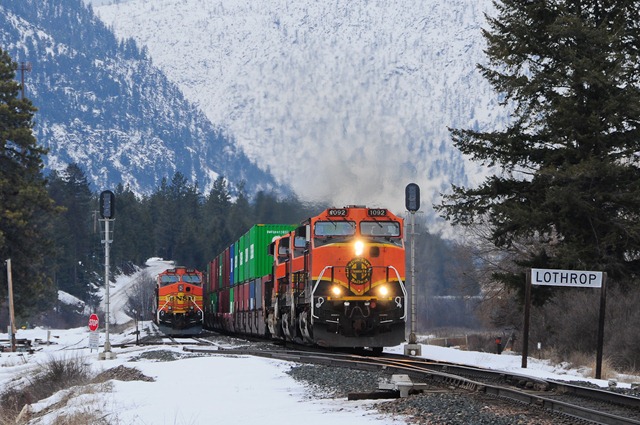 … and then things went quiet for a while. Eventually my train got the clear to proceed, and just as the end of it passed me I noticed he was slowing down fairly quickly. Odd, I though, changing the points maybe? No… cos last train was aligned for the main. Then I heard him radio in that they'd felt the locos surge and then go into emergency.

I walked back and found a nice stream and a foal: 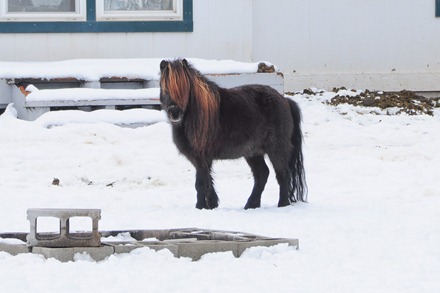 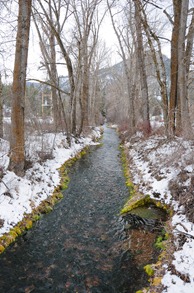 I drove up the road a bit and soon found the problem: 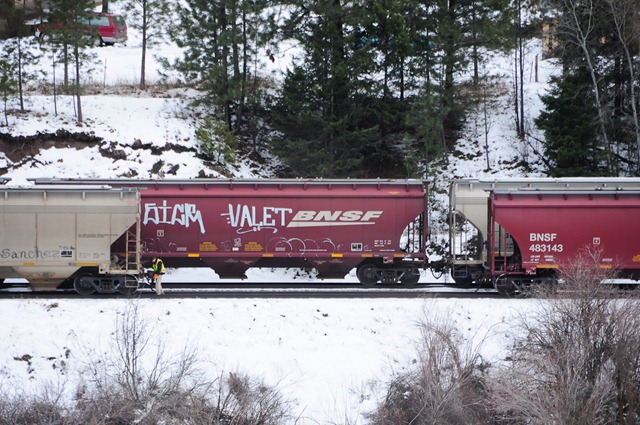 Well, $@*#%, the train had split in two! Broken coupling, and there was a complication making it extra difficult to change the knuckle (which weight 25kg+ to start with). Well, I gave him 10 minutes and he was still having trouble.

Screw it, I'm going north! I'd read that there had been an incredible snow fall up there the previous few days, but that things were starting to settle down and the forecast looked promising, so I programmed in Essex and headed on up there.

I soon climbed out of the gray crud and into glorious sunshine, suggesting I had made the right choice. 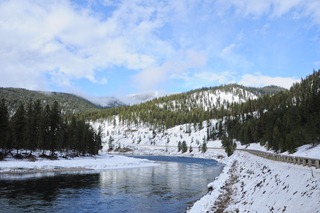 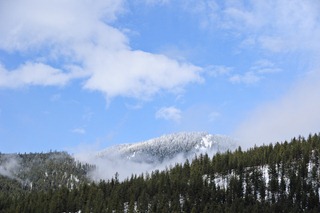 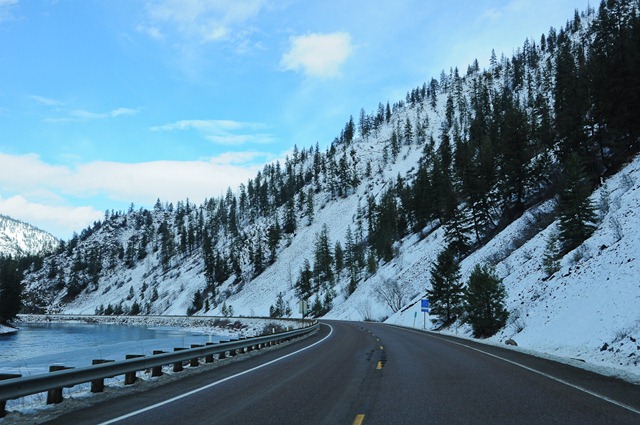 The scenery was pretty amazing (would've been even better with a train but never mind). I passed a very frozen looking lake: 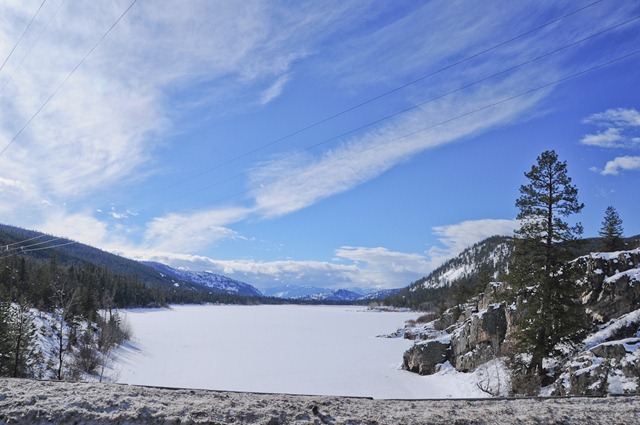 And my personal favourite, if only I had some skis handy! 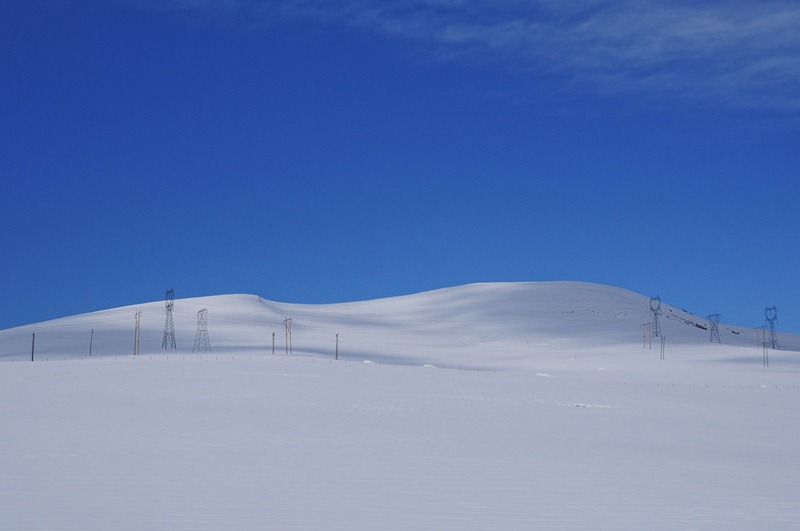 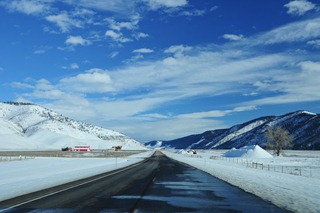 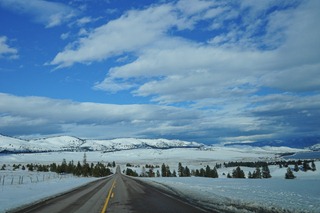 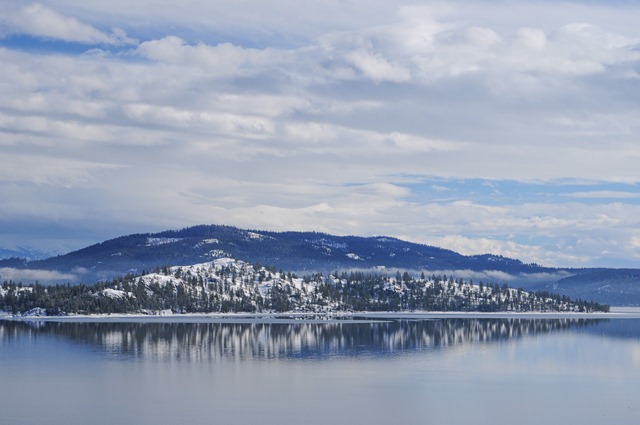 Driving isn't hard when you're driving through scenery like this! And then I turned a corner and drove into THIS! 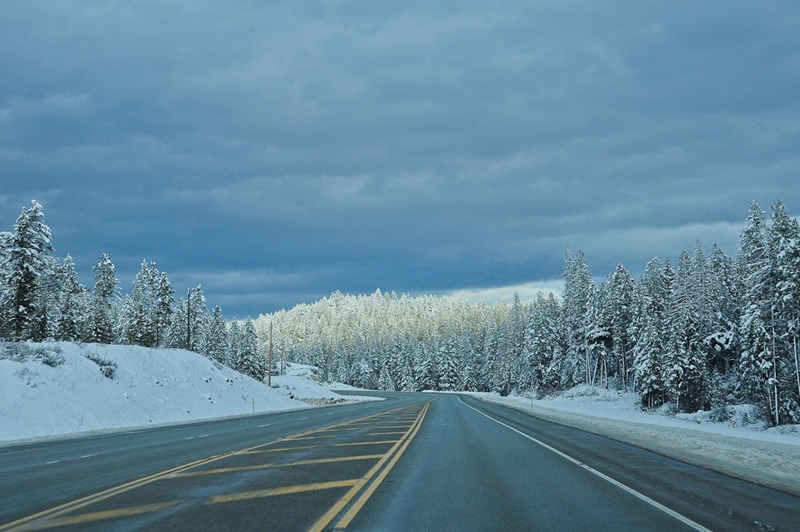 Wow! Nothing beats fresh snow on mile after mile of conifers.

An hour and later I was tracing the BNSF "hi line" which is their northern most route across the US, mere miles from the Canadian border in places. I was driving along and rounded a corner and wow, there is another BNSF earthworm! These things are like a plague across the states! Not that I'm complaining, I do love how neat and uniform these trains are, and they usually move pretty quick.

I was following him but got ahead, and then spied a tunnel. Oooooh! Started scanning like mad for a pullout so I could do a U turn (but tricky when the road is plowed no wider than 2 vehicles). Found one. Went back and couldn't find the tunnel! Oh :( Drove off and immediately found it again. Argh! Rinsed and repeated and this time found it on foot just fine and set up for my shot. Wonder what other motorists thought as they rounded a curve and saw me standing on top of the snow bank staring off into the distance?

I waited for a bit and carefully listened for any train noises. Nothing. Just cars. Then just the slightest vibration in the air… could it be… louder now… getting louder, but too slowly to be a truck… yes… 99% sure… far too loud to be a truck now… yes it's definitely my earthworm… and here it comes! 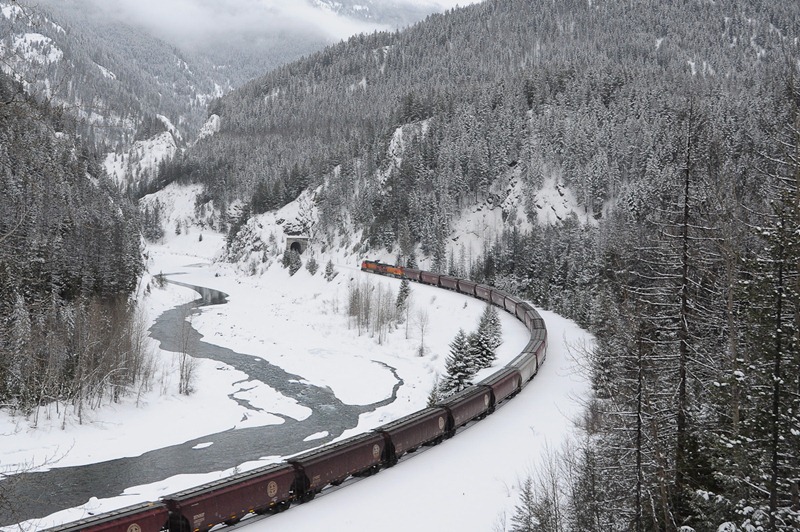 I watched him snake through the tunnels, it was quite a sight. Further up the road he came to a rest in a siding, waiting for another train I guess. This always seems to happen out here in Montana. 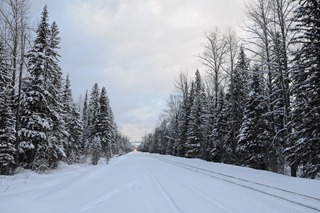 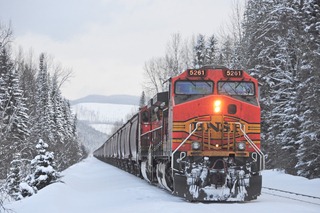 Slowly coming into the loop. The grooves that look like vehicle tracks are actually the loop, very deceptive! And here he comes.

The snow on the road in was a bit deep and slippery and my SUV doesn't seem that sure footed in snow, especially since it's not really a 4wd, so I parked at the entrance. While waiting another car turned up and was surprised to find me there; I pulled out and they roared on through no problems at all. Hmm… my V6 AWD SUV had struggled and complained almost immediately, while they had gone speeding on through in their 1980s vintage Toyota Corolla!

I gave up waiting for the train since it was getting dark anyway, and headed off to Essex. Well, Essex was not at all how I imagined it from the maps I'd seen! But wow was it a hive of activity. BNSF trucks were everywhere , there were banker locos coupling in, a pair of geeps hooked up to a plow, several other specialised plowing machines, and even the Loram rail grinding machine. It was amazing! Stuff happening everywhere, and the whole place had the feeling that if so much as a flake of snow landed, they would be there dealing with it the moment it touched the ground.

Snow plow, Montana style! This is actually a flier and runs at track speed, digging out show from between the rails. 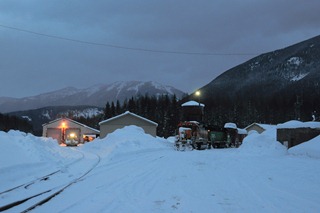 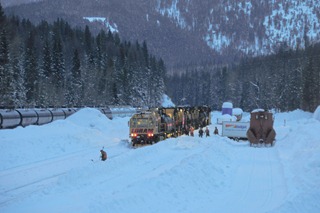 Some of the depot buildings / Loram rail grinder getting refuelled and restocked.

Utterly impressive and very cool! The Isaak Walton hotel overlooks all this, but at $130+ a night it was well out of my price range. So I drove down the road to the Snow Slip Inn where it's only $50, and figured with the $80 I saved I'd buy myself a loco. 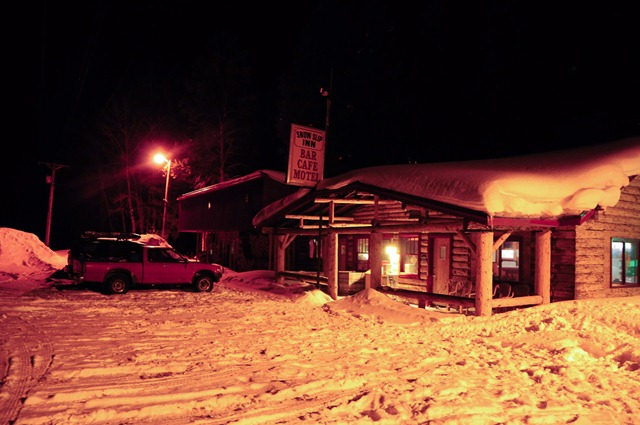 I parked and opened the door and had only just walked in when I heard my name being called. Uh? I looked around, thinking that the voice sounded familiar, well, who was sitting there having dinner at the Snow Slip Inn than one of the guys from the Nevada Northern weekend! The General Manager of the BNSF Montana Division no less! So we had a good catch up and swapped tales, sounds like it had been a bit of a nightmare the last couple of weeks, with derailments, drifting snow, trains wedged in snow drifts, more derailments, and so on! Poor Rick hadn't had much sleep, trying to get everything running again.

So that explains the hive of activity and continuous parade of trains, and the crews everywhere all ready to pounce on any stray flakes.

I got a room for the night, although I had to dig a path there, and the snow was up to the ceiling in places! Also the wifi only worked in the main building, and was getting progressively worse to the point that sending a single 10 line email took quarter of an hour of continuously trying before it would send! Turns out all the wind and snow as knocking the dish out of alignment, sending the signals off towards Saturn or whatever… explains why things weren't working!

Had a good chat with the inn owner that night, and the cat came and said hi briefly before going off to watch the snow. Then it was off through the snow to my room. Forecast was for a bit of snow, possibly, but it dodged us and headed off for Minnesota or wherever it is snow storms go. I wasn't too worried, there was plenty of snow here to go around! 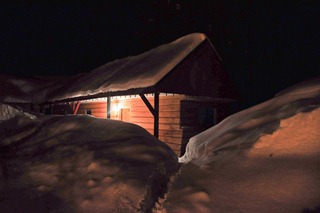 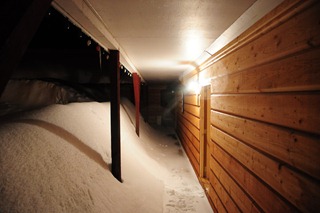 The path to my room, and the height of the snow!