Day 32 - Madras OR to Klamath Falls OR

Day 32 and I wake in the little town of Madras, Oregon to another dull gray day. Some quick GoogleMaps-snooping showed a good trestle up the road, so I went to have a look. Indeed, yes, it was quite a bridge, spanning a vast canyon that lead down from the plateau above Madras. Unfortunately it was very dull and gray, and with no trains around, there was nothing photo worthy. I sighed and hit the highway.

Half an hour down the road I hit the jackpot though, at the Peter Skene Ogden State Park (what a mouthfall). You know you’re in for a treat when they warn of 300ft cliffs and the warning signs feature flying dogs! 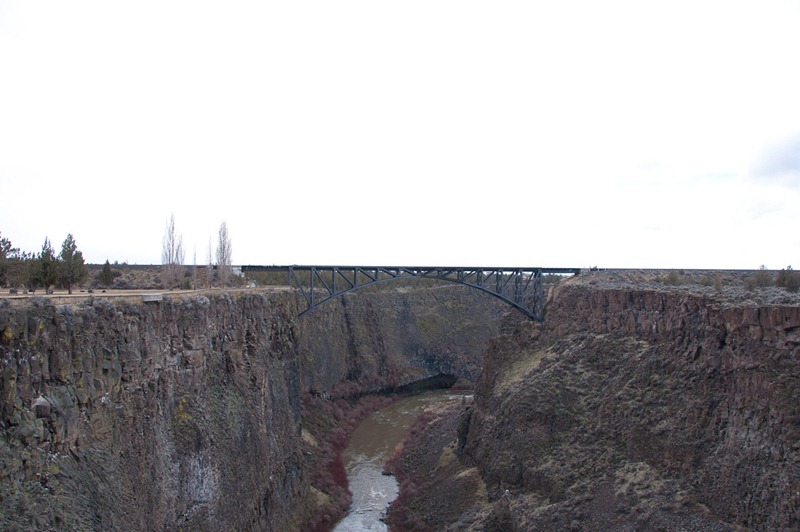 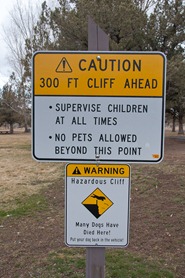 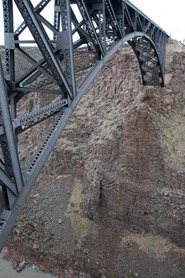 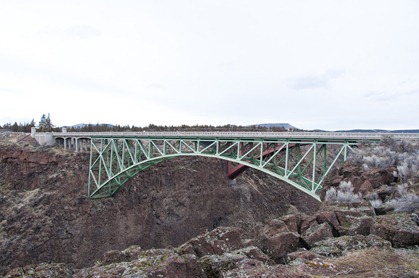 The history was pretty interesting, with the railroad being first across. Given the sheer drop a single span is the only way to bridge the gap, which made construction a little challenging; photos show rope ladders dropping down the canyon walls… imagine climbing that every day!

Thankfully here in Oregon if you want to walk across a 300ft high bridge they really don’t care. So I did just that, on the old highway bridge. A little unnerving were the drainage holes in the deck that give a clear view through the 2" thick deck, straight down to the canyon floor below.

I drove on, through the town of Redmond, OR; big, but by no means its better known brother up the coast in Washington (Microsoft's headquarters). 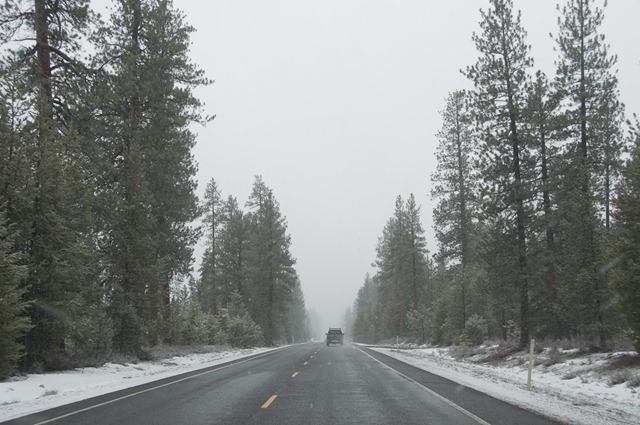 A few hours later I entered the dense Umpqua / Willamette / Deschutes / Winema / Fremont National Forest. I can only assume somewhere in the rules there is a tree-limit for a national forest, hence the sheer number of national forests here. Whereas in Nevada, they have just one national forest that seems to stretch the entire state; anywhere you find more than a couple of trees in the same acre you'll see a sign for the Humboldt-Toiyabe National Forest. 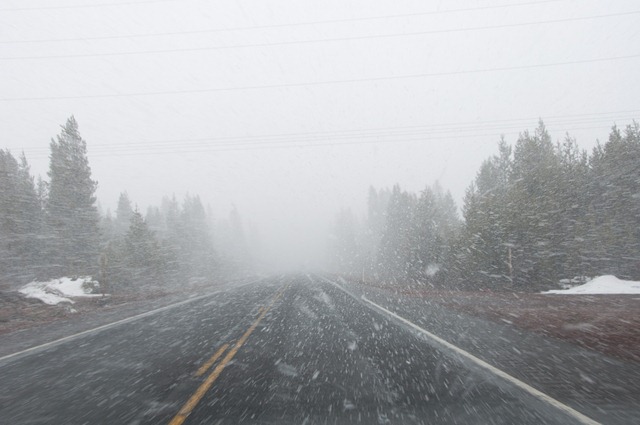 I soon drove into a heavy snow storm, and here is where I decided that Oregon's "Thou shalt not fill your own tank" law was quite handy; while the snow drove in horizontally, all I had to open my door just enough to pass over my credit card and shout out "regular". The poor attendant got all the fun of frost bite, snow down his collar, fighting off the Yetis, etc.

By 4pm things had cleared and I was driving along the Upper Klamath Lake, admiting the storm moving over the water. 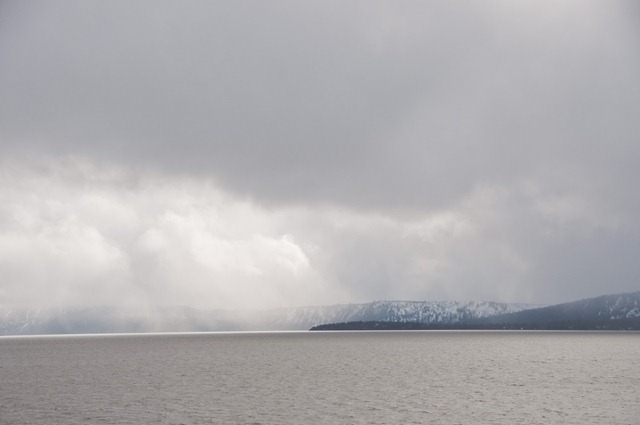 I arrived in Klamath, got thoroughly lost, drove back through Klamath, intercepted a BNSF freight and made a beeline for the station. 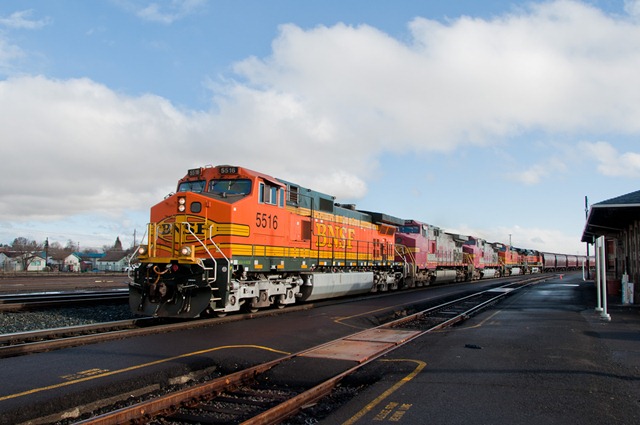 I was in for a bit of a treat as a 5 pack of BNSF GEVOS slithered on the head of what appears to be an earthworm but is not. Special highlights included an especially vibrant pumkin on the front, and two Santa Fe warbonnets; not often you see them still wearing their former names. 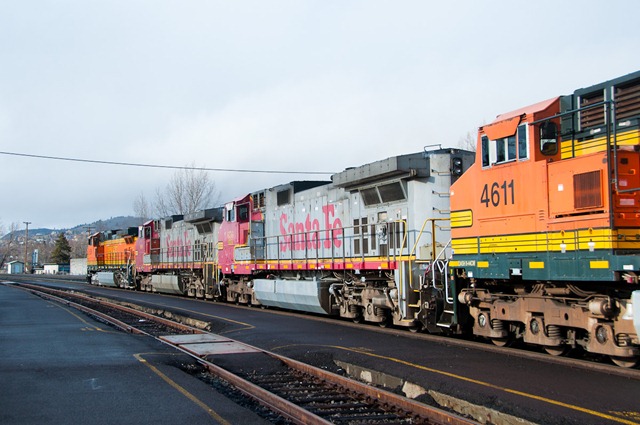 I jumped on the highway and promptly got stuck in roadworks, just in time to see a UP manifest stroll past in the opposite direction as I waited for the highway to open. Appears that a truck had lost its load and there was a cleanup operation in progress. 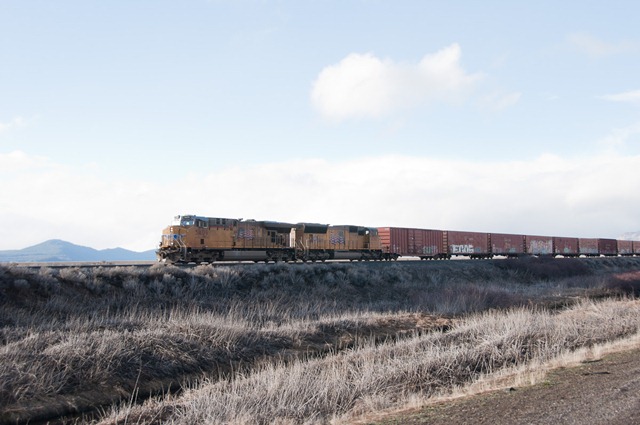 I drove on, somehow miraculously still ahead of the BNSF manifest. I had seen a neat photo taken up the road, however the lighting here was nothing short of spectacular, with a passing gap in the clouds letting me in on some stunning storm light. I parked the car and started climbing the old road to get a big of elevation. Of course you know how this goes, soon I was halfway up the hill, watching the birds of prey circling… counted about 8 at one point if I remember correctly. 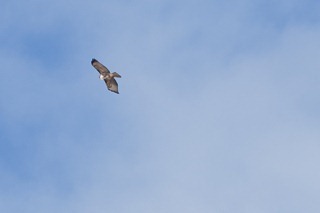 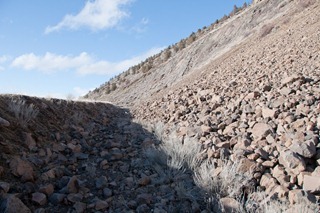 Soon enough I spied the familiar triangle of headlights off in the distance and soon I was snapping away. 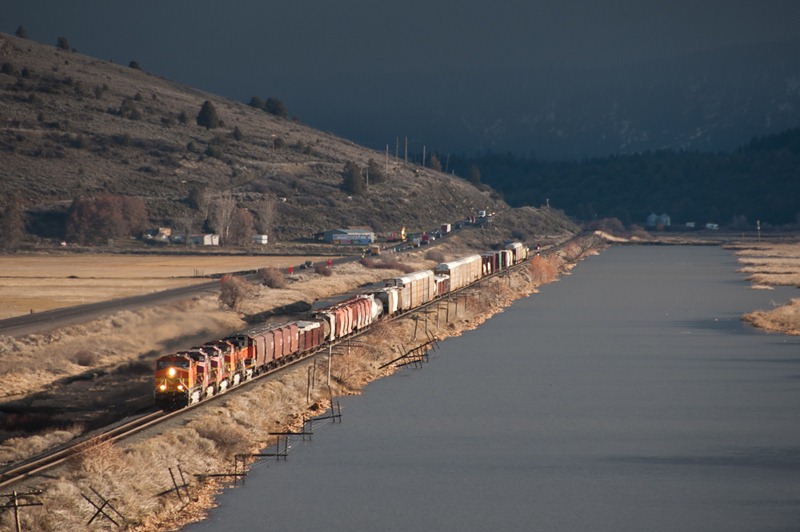 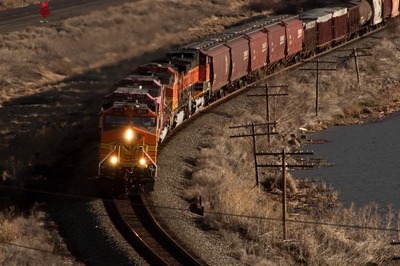 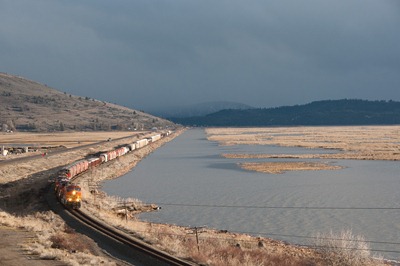 Amazing huh! I clambered down and 20 minutes later was back in Klamath in the middle of a snow storm. I tried to get a photo of the spreader and flanger in the yard, but only got white fuzz. By now it was getting late so I found somewhere to camp for the night; I honestly don't remember anything about the motel which must mean it wasn't amazing and wasn't terrible. Ditto for the meal.