Goodbye Vegas, hello desert. We left as the third couple of the of the morning completed their marriage ceremonies at the Little Chapel O' Love across the road and the 30th limo drove by. As we headed out of town we passed the numerous ticky-tacky subdivisions that are sprouting up to house the ever increasing population; in the last 10 years it has increased three times , from 740,000 in 1990 to over 2 million presently.

Soon we were out in the desert heading south. An hour later and we were zig zagging down a road to a security checkpoint, although this time they weren't too worried about us. We paid the outragous parking fee and went exploring around the Hoover Dam. 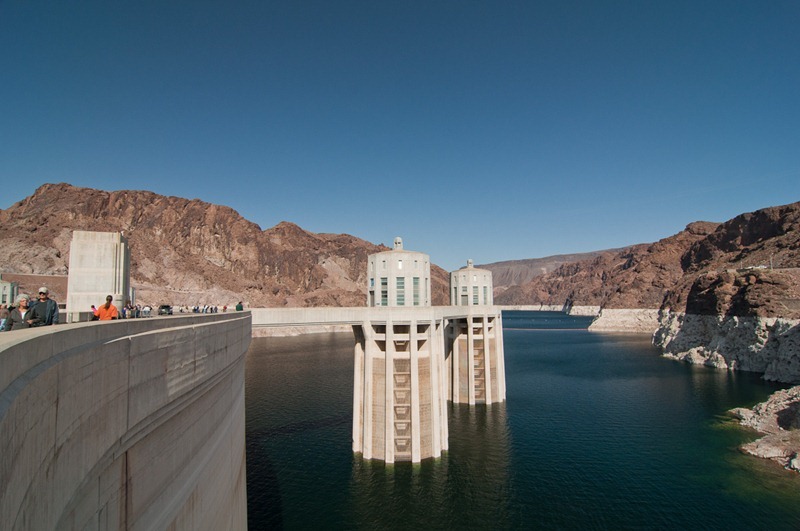 It is, of course, quite impressive, having been chosen as one the 7 wonders of the modern civil engineering world, others being things like the Panama Canal, the Bay Bridge between San Francisco and Oakland (not the Golden Gate Bridge), and the Chicago Sewage  Disposal System (?!). 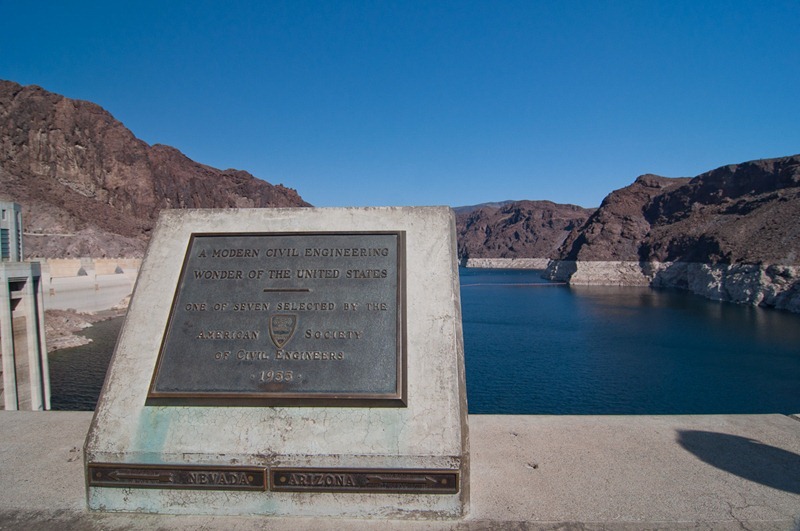 As we walked across the bridge we lost an hour in time, then gained it again on the way back.

The intakes were very impressive, being absolutely massive. On the other side of the dam, one could look all the way down to the bottom, a very James Bond-esque view (though not the actual dam that Bond bungee jumped off in Goldeneye). In the distance the new highway bridge soars above the canyon, removing a massive bottleneck from the journey south. 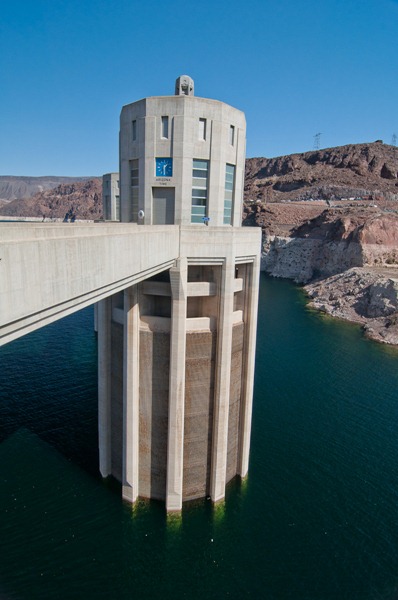 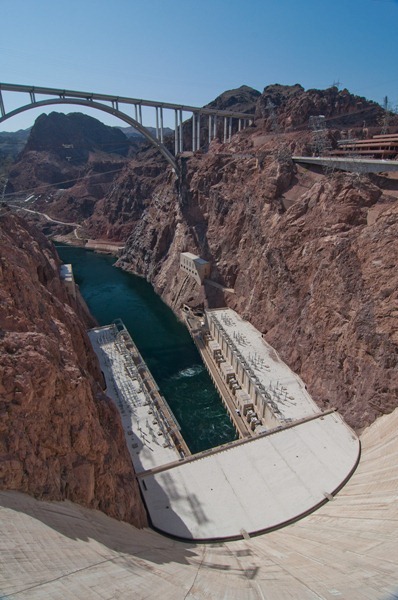 That said, the road over the dam is still open and gets a lot of traffic. The Hoover Dam Police (yes, they have their own police force) are very twitchy and maintain a constant presence. While walking across they were escoring a pickup towing a U-Haul trailer, and when he stopped for pedestrians they gave him a very angry blast on the horn. I guess in their minds every U-Haul trailer is backed full of C4 and driven by mad turban wearing middle Easterners! 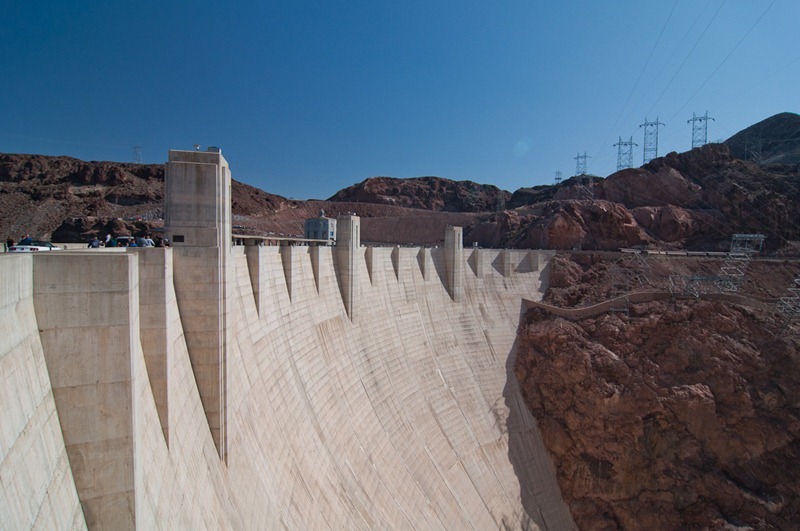 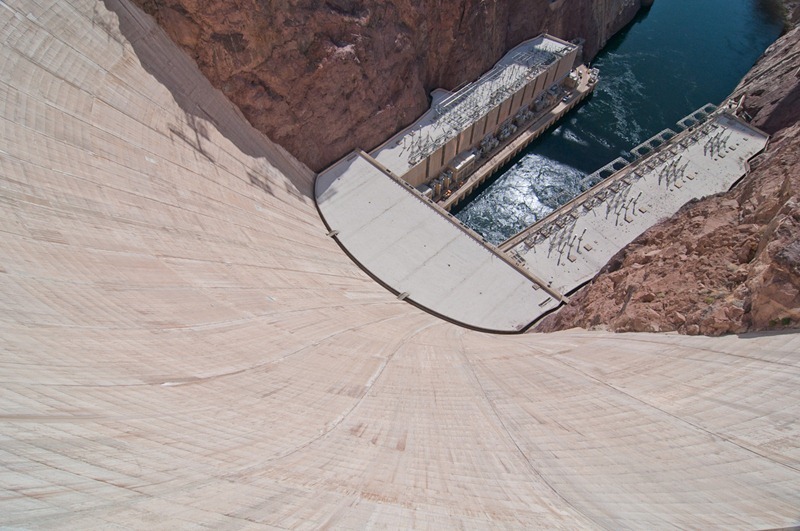 After exploring for a while we visited the gift shop. It was like something out of chinatown, with barely enough room to move. The souvineers were cringe-worthy; if it could have HOOVER DAM printed on it, it was probably there. Among the worst were a shelf of Hoover Dam shaped ceramic piggy banks. Yuck. The Jackalopes were quite well done, although they'd never be allowed into NZ. Jackalopes are a mythical animal, a jackrabbit with antelope horns. There is some amazing fan art on Google Images. 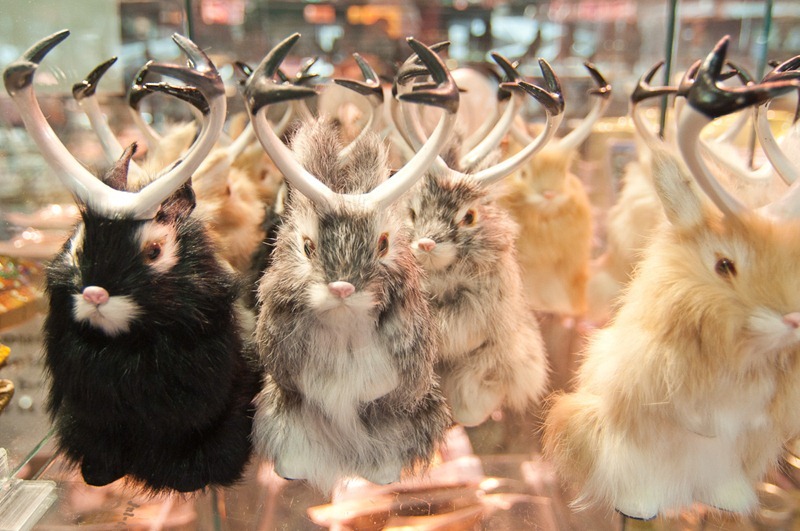 Outside is a brilliant statue of a "high scaler", the fearless men who would abseil down the canyon during the 30s and place explosives or remove debris. It didn't always end well for them I gather. 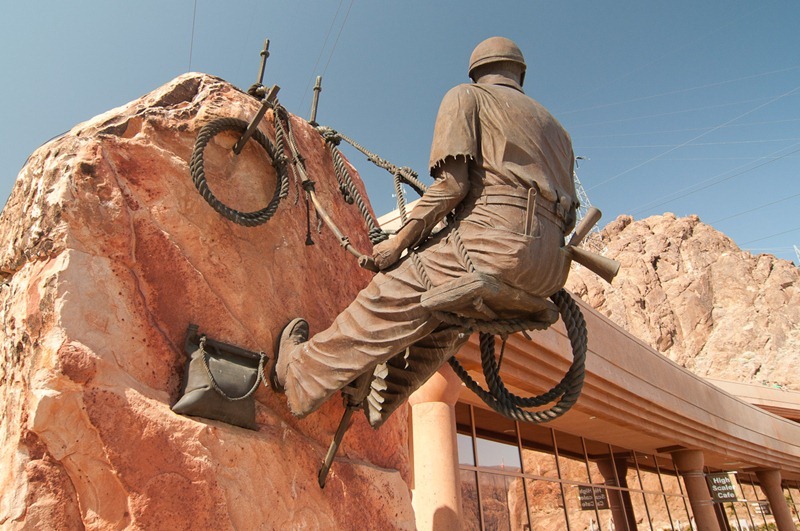 The security notices were, well, funny. Remind me not to wear a peaked colar and pointy hat. 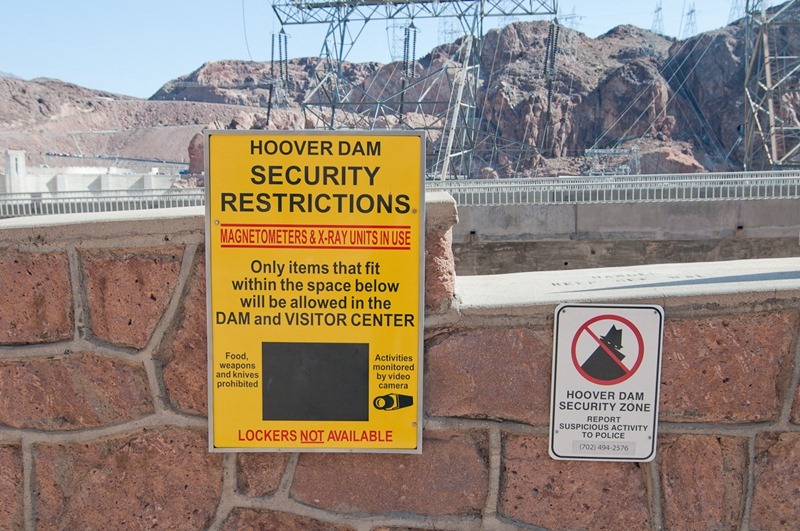 After leaving the Hoover Dam we headed south for Kingman, then onto the old Route 66 for Flagstaff. As ever the drive along 66 was fantastic with almost no traffic, and nothing but stunning desert. It's been a while since I've driven it, but I remembered many of the places from my various adventures along there.

We stopped at Seligman, one of my favourite "not quite dead" towns. 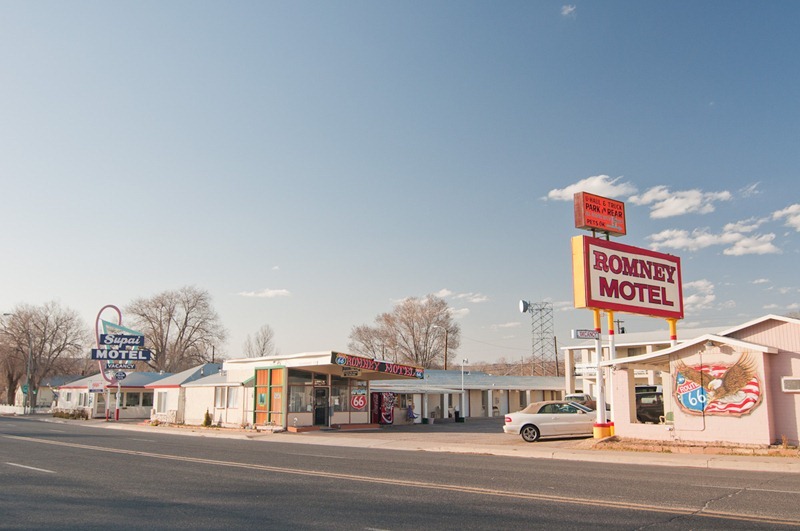 The Snow-Cap was closed, as it usually is in winter, but you can still admire the chaotic decor and bizarre garden. 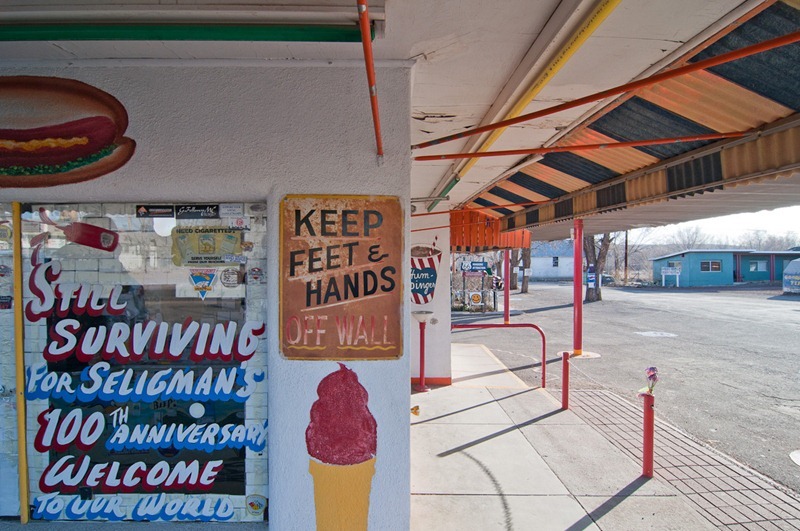 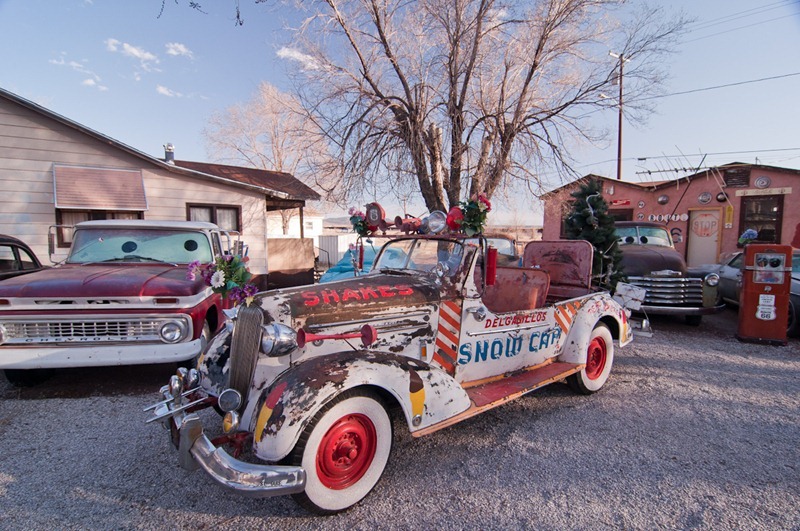 The town is full of amazing old cars, being as 66 was the "mother road" that linked Chicargo with Los Angeles and for the first time people could easily take their new motor car on a cross country all-American tour, staying at motor hotels (later named motels) along the way. 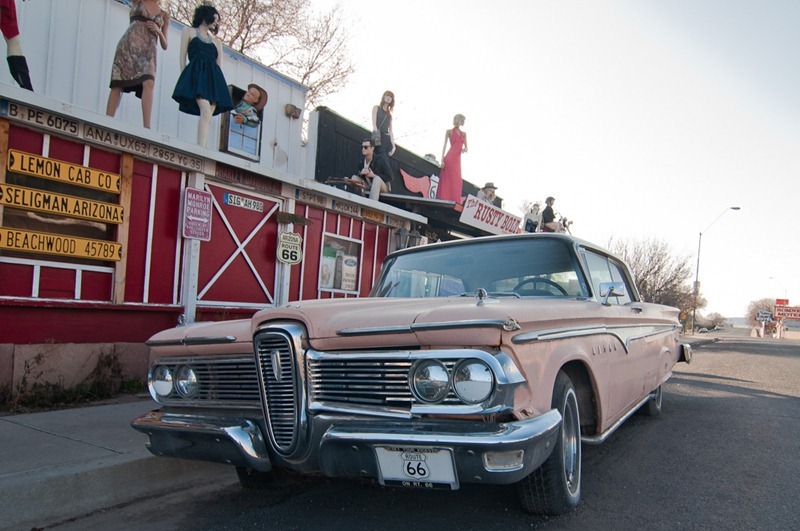 We visited one of the many souvineer shops and surprisingly it fared better than the Hoover Dam gift shop and actually netted a purchase from me. The chaos here in the gift shops was the right kind of chaotic, leaning very heavily on the quirky end of the spectrum. 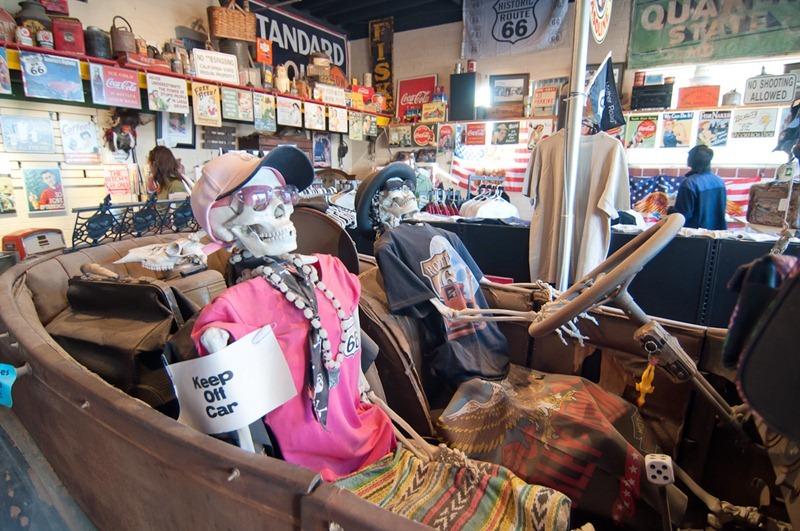 Then it was onwards towards Flagstaff. We caught the sunset at Devil Dog Road thanks to some frantic offroading. 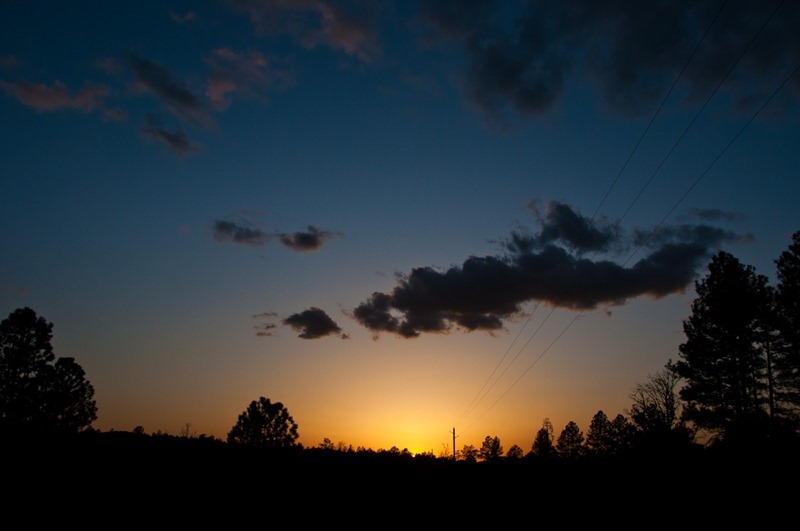 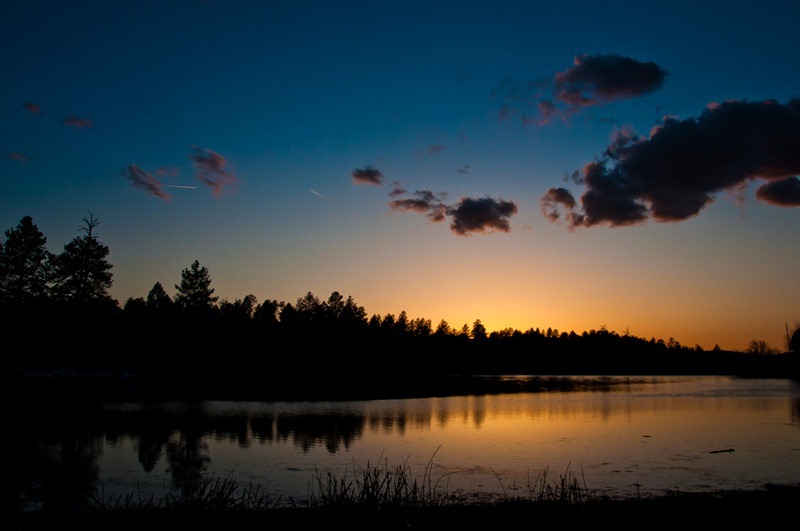 Then it was on to Flagstaff. We found a motel and checked in, only to find our rooms came without soap or towels, and in one case, without even toilet paper! Then it was off to dinner, and the only thing that looked promising was Granny's Closet. With a name like that we weren't too sure what to expect, however what we got was amazing with a great waitress and huge meals. My half rack of ribs had an inch thick of pork on them and were enough to feed about two of me. Part way through the manager even came out and had a chat with us; apparently kiwis aren't that uncommon in Flagstaff, many finding their way here and finding it difficult to leave. As usual, I could understand why.

Eventually we managed to drag ourselves out to the car with very full stomachs and headed back to the motel. Throughout the night the trains continued to roll on the BNSF TransCon, the 100+ trains a day super highway from Chicargo to LA. Thankfully now that Flagstaff has become a "quiet zone" the 20+ horn toots from every train as they make their way through town are a thing of the past. As much as I like a good train horn, the novelty wears off very quickly when it's right outside your window all night long. Sides, the new BNSF "push button horns" aren't that melodic; they're just a loud blare.

With full bellies it was off to sleep, ready for to go explore the Grand Canyon in the morning.