After climing Mt Fuji and having only hours sleep over the previous 48 hours, sleep was very welcome, however I was a little surprised when I heard a knock at the door, only to discover that it was almost midday… checkout time was 10am! Felt terrible and a furious scramble ensued to get out ASAP.

Teri and I headed down to the train station and caught a train to Kameoka. Kyoto is fairly built up, but we soon entered a long tunnel and when we excited we were in the middle of a forest, flying over a river, then plunging into another tunnel, only to emerge over water again. The scenery was very pretty.

We soon arrived at Kameoka and started heading towards the river rafting place that Teri wanted to see. 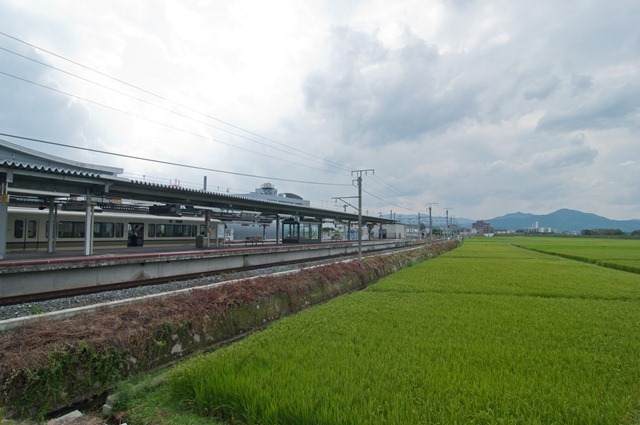 Kameoka is fairly rural, as you can see from the great rice fields right next to the station. 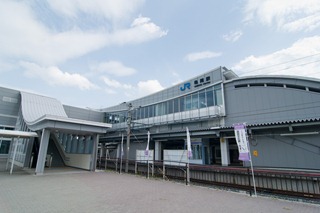 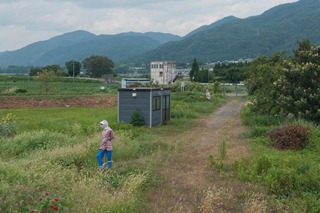 The station is pretty modern, and yet turn 180 degrees and you'd never know. The scare "crows" here are pretty realistic looking people.

We found the rafting place and successfully registered, paid, etc. A few minutes later they started calling numbers or names, not sure cos it was all in Japanese. Apparently our number had been called but I of course I didn't recognise it. Then 10 minutes later we were frantically rounded up and rushed down to the boat, sigh, late again :(

The boats were rather strange things with little wooden benches and canvas roofs. A couple of guys up the front had bamboo poles to push us along and a guy at the back had another to steer with. 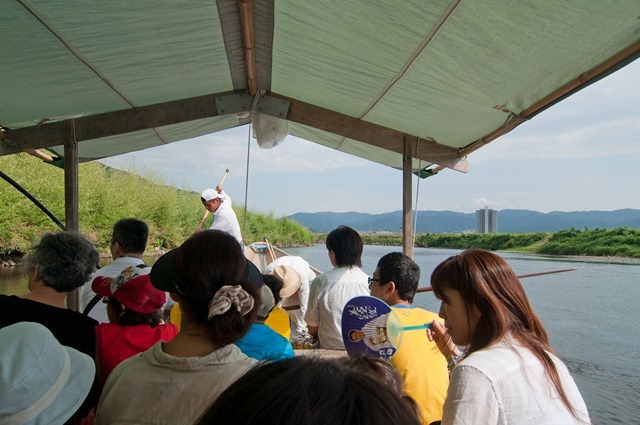 Here we are on the quiet part of the river, notice the high rise in the background… how very Japan! 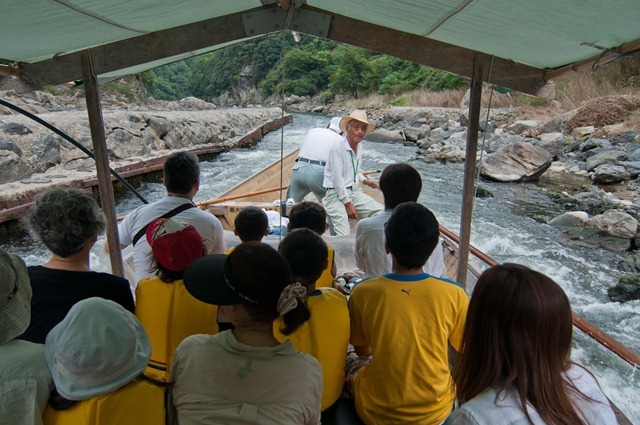 Here we are going down one of the rapids. They weren't that scary, although the rest of the boat thought so. Look carefully and you can see how the river has been deliberately channeled on the left to make better rapids. 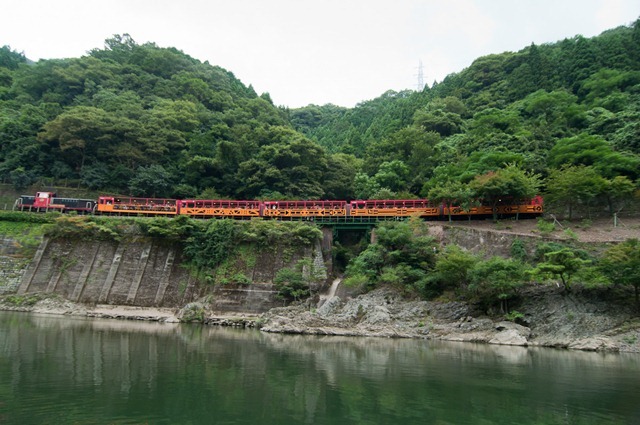 The canyon is very pretty, with rather NZ-like growth. There is a scenic "romantic" train that runs along beside the river and we passed it a couple of times. 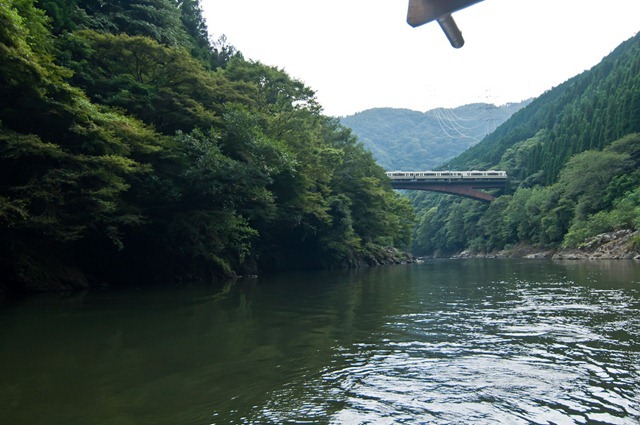 We also saw the train quite a few times shooting overhead. 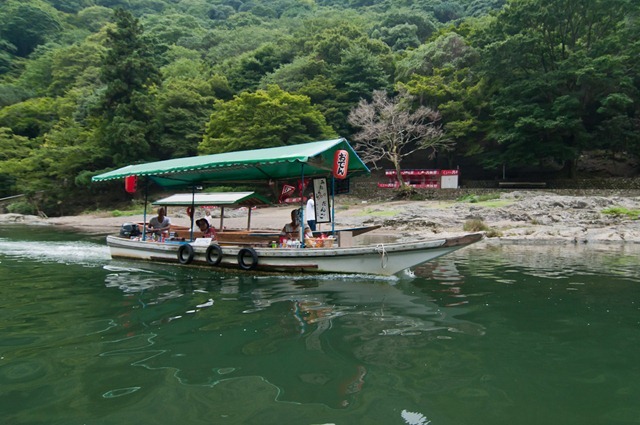 After a while the river opened up and the rapids disappeared and, bizarrely, we were joined by a "shop boat" which came up alongside us, hooked on, and then pushed us along. There was a frantic exchange of food and money and all sorts of bizarre things were handed across. After a while the detached and went off on their way, while we pulled into the dock and hopped off. 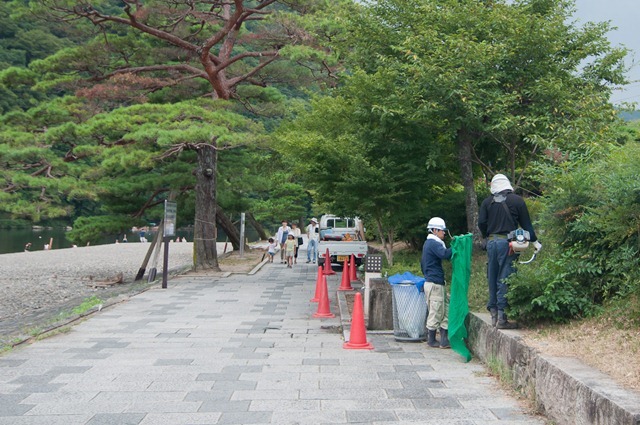 Walking along beside the river I saw some Japanese workers using a weedeater. One of them had the weedeater, and the other was holding up a protective screen to stop the grass, stones, etc from hitting people. Not like NZ at all!

I wanted to see the bamboo forest so headed off along an approximate path to try and find it. 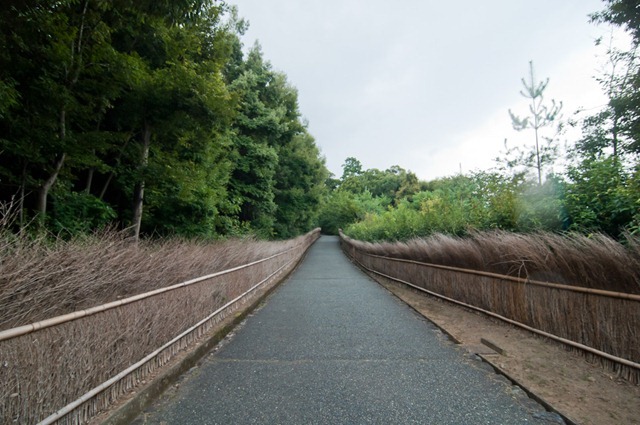 The walkways were very pretty with nice brush fences. It started to rain a bit, but it was hot so I didn't care. I soon found the bamboo, and WOW! 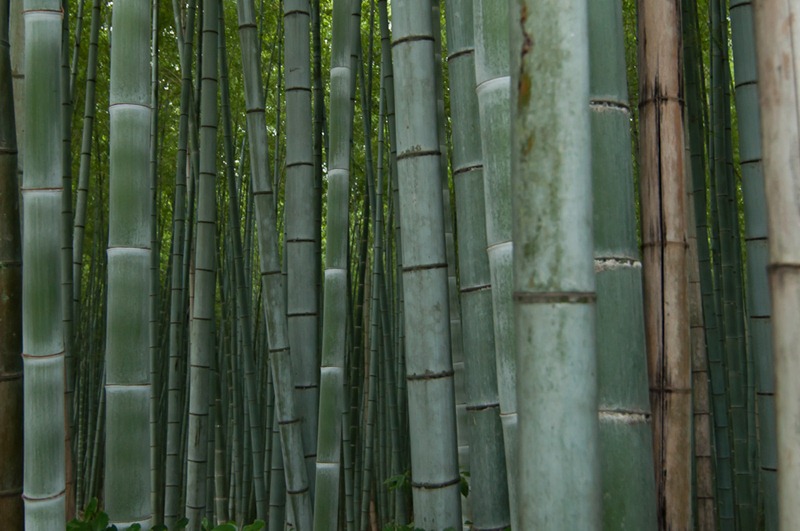 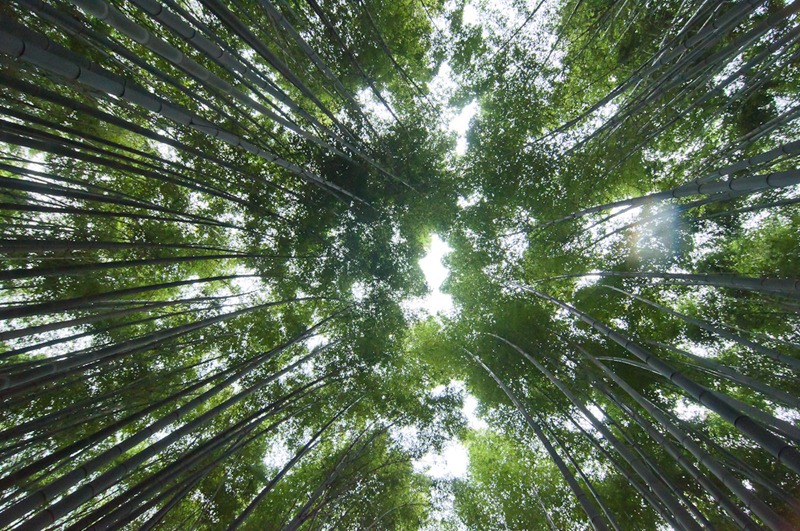 The bamboo was amazingly high and completely drawfed us. 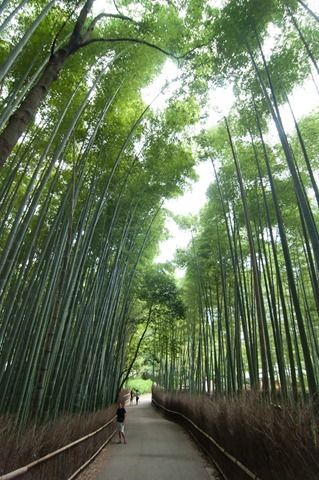 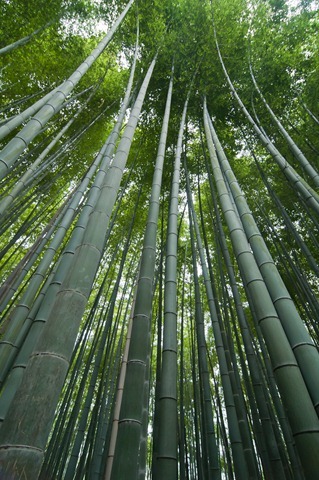 It was very peaceful with just the sound of the rain and frogs. Although every so often a vehicle would come past, apparently these were actually roads. 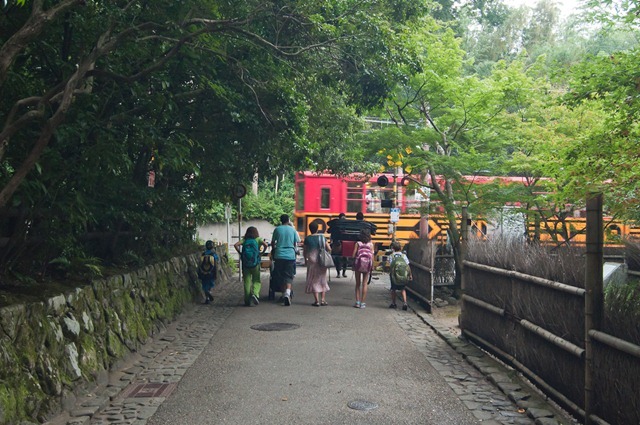 And at the end… a train. We were quite hungry but didn't have much luck finding food. I got a pineapple on a stick, and unlike NZ pineapple, it was very soft and sweet and very yummy. 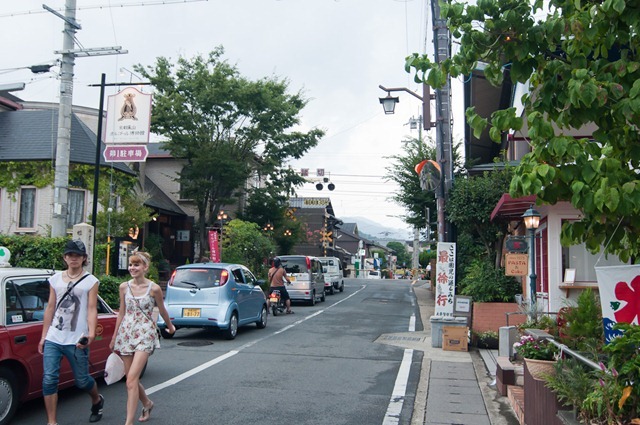 Here is the main road while I wait for a train. Very busy, lots of little cars, people, signs, and lots and lots of plant life.

We were running out of time so headed back for the railway station. 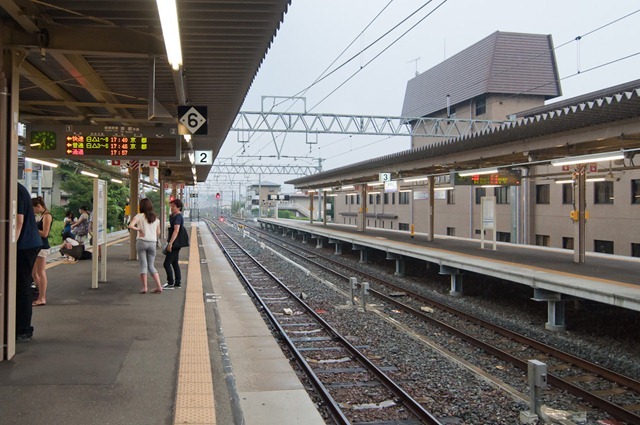 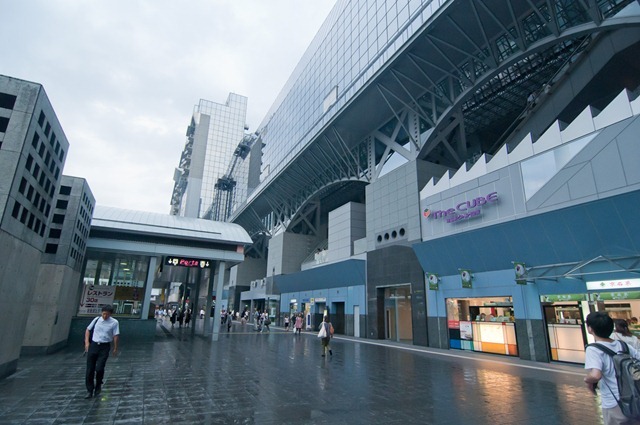 We returned back to the hotel and Teri gave me some stuff to take home, as she hadn't packed quite as lightly as me. She ended up giving me almost everything, so I now had my backpack and sleeping bag, and her huge tramping bag. Was a bit of a pig to try and carry all three!

Having done the swap we rushed back to the station and I caught my Shinkansen with a few minutes to spare. Luckily I had enough time to get a premade dinner which I quickly devoured and promptly fell asleep. Woke up in Tokyo and made my way onto the subway to get to Asakusa again.

Got off the train and lugged all my stuff out onto the street. Follwed the directions and after walking for 15 minutes was annoyed to recognise the place as where I had first started my journeys; the directions should've told me to catch the other metro line and save all that walking! I ended up stumped by the last bit of the directions which had me looking for a non existant gift shop. As I stood there scratching my head in the pouring rain, a voice called out "Hey there, you looking for the Sakura Hostel?"

Moment of shock as I realised an American accent was talking to me! Turns out it was just around the corner, but yes, a little hard to find the first time. Checked in and got a nice wee room. Had a glorious shower and enjoyed the rather odd architecture with it's huge slabs of concrete and open hallway with huge steel mesh.

Think I might've smuggled some food into my room, but honestly can't remember. Was very happy to crash in bed and fall asleep.