Todays item on the list was to go see the Japan National Railway Museum. And so sure enough at 10am I was heading out the door and into the sauna. Already I could feel it was going to be a scorcher. I caught the subway to Ueno and then spent a good 10 minutes scanning the JR maps for Saitmo; when you don't speak the language every station name looks pretty similar at first! Eventually found it, worked out what trains and what stations and set off on my way!

Yamanote Line was fine, and them onto the Omiya Line on a regular commuter service. Long slow trip with many many stops, but eventually got there. Back into the sauna and onto the overpriced, slow and bumpy "new shuttle" to get to the railway museum. The "new shuttle" is a sort of train that has tiny little short carriages and runs on rubber tyres on a concrete "track". Their one saving grace were large refrigerator-sized air conditioning units in each carriage. 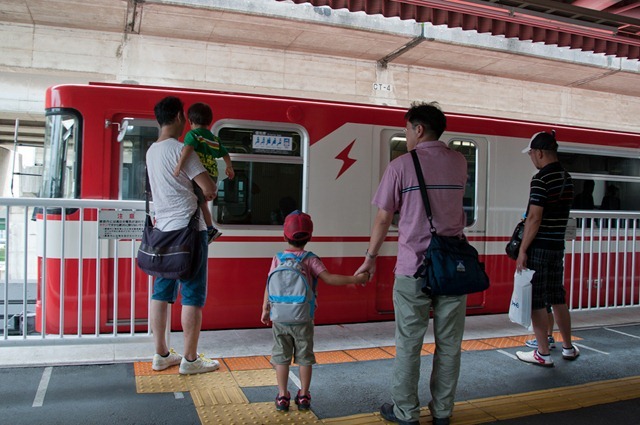 As we slowly bumped and lurched along several local commuter trains overtook us and a Shinkansen completely blitzed us. We soon arrived at the station though and eventually I worked out how to purchase an entry card. Out here in the wider parts of Tokyo things aren't as non-Japanese friendly and there was very very little English signage around, which made things interesting. Nothing a bit of people watching and pondering couldn't solve.

I entered the main area and wandered among the exhibits. They had a cermonial turning of the steam engine on the turntable, complete with whistling. 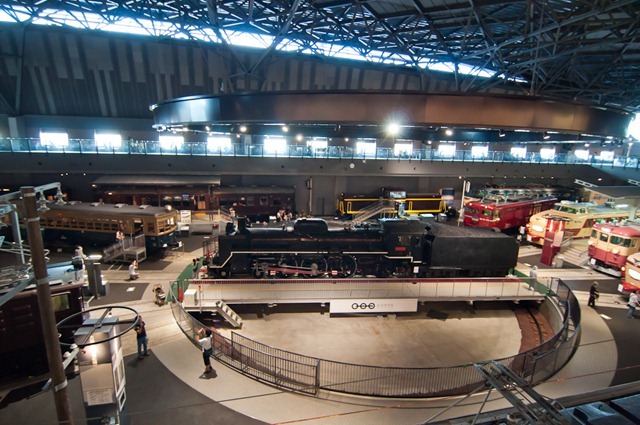 I found a Shinkansen room which was very interesting with all sorts of info and some amazing 1960s photographs of the Shinkansen's maiden voyages. What I found curious was that the 1960s Japanese women were sporting very 1960s hairdos and clothing, something I did not expect to see having such a big effect in Japan. The photos of entire platforms lined with people waiting to see the Shinkansen was quite something, though I can see why!

Here is a cab shot of a first series Shinkansen; not especially comfortable looking. 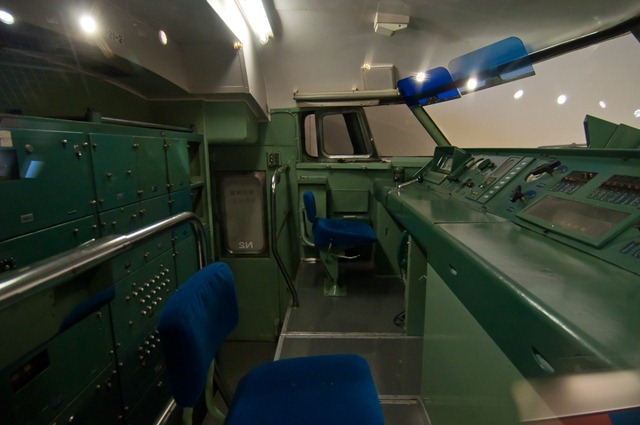 And here are some of the period toys… 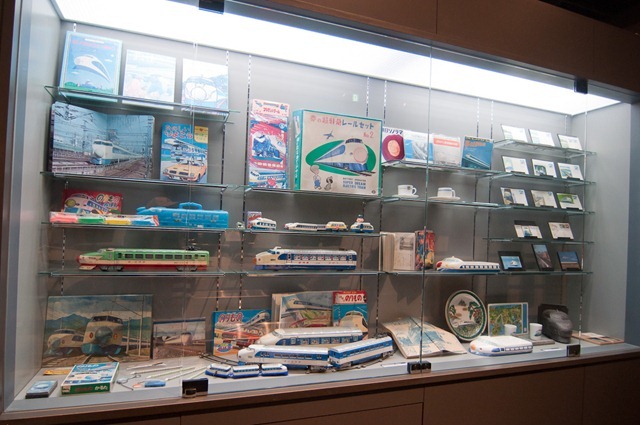 I looked around some more and had a bit of a peer in the ED electric loco they have; very similar to some of the Japanese-built electric locos we used to run, even down to the same gross tint of green used for the cab! 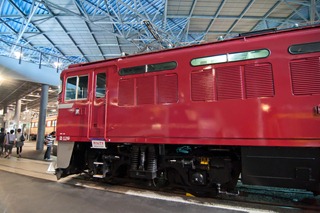 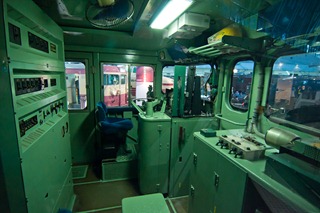 Unfortunately as I have since discovered most JR electric locos have faded a lot and are now quite pinky.

By now lugging around my backpack with all my worldly possessions in it was getting pretty tiring. I found a queue for something about a "diorama"; that was all that the sign said in English. I joined the queue and it turned out they had a choreographed show with a giant railway. You can probably get a sense of the scale by the life size human walking across to rescue a train… 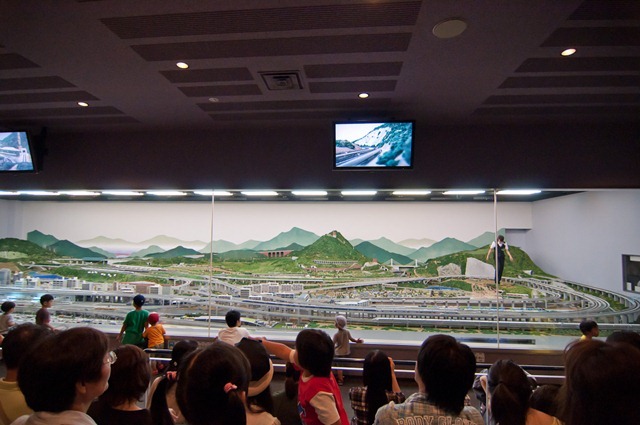 The show started and I didn't understand a word of it but enjoyed watching the trains loop around and around. Behind me several babies were having a screaming match; the one closest to me was natually winning! I was very impressed by the size of the railway!

After that I headed off. While I liked the museum I left feeling a bit empty; I guess I like seeing trains in the wild more. It's like the difference between a stuffed animal musuem ( yes they exist ) and going on a safari, and besides I quite like the adventure of finding these trains and seeing them in their natural environments.

Because I didn't especially want to spend an hour on a local train again, I made a reservation for a Shinkansen and soon enough I was whizzing along at a stately 150kmh back towards Ueno, at one point counting eleven other tracks next to us! Coming into Ueno at one point 3 trains crossed us all at the same time, and this wasn't even rush hour! So just 20 minutes and zero stops later I was at Ueno again. I jumped on a new subway line to find my new accomodation (no vacancies at previous place) and was soon exciting into the sauna again.

Crossing over the tracks I found a JR freight yard, complete with locos like I have been seeing on my granddad's model railway since I was a tiny thing. Was cute seeing the real thing! What I wasn't expecting was that these have whistles, like a little steam engine, not horns. Seems a very weird combination! 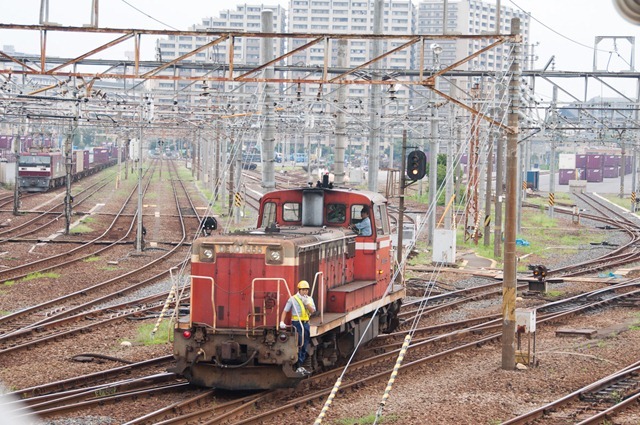 After a "warm" ten minute walk I found my new hotel. A shower has never felt so good! I was also very glad to be able to put my backpack down, and to have wifi in my room.

I could hear a thunderstorm brewing and before long it started pitter-pattering down. 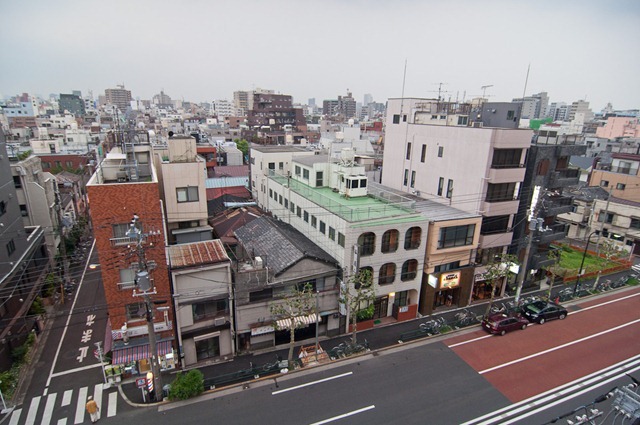 View from my 6th floor room.

Later on I went looking for a restaurant. The clerk at the hostel wasn't much help since he'd only just started. So I set off and after 10 minutes in the light rain (it was refreshing!) I found a place with pictures of meals in the window. I had a quick look and decided some of them looked good. Followed another family in so I could see what the protocol was and not make a total fool of myself! When I saw the menu it turned out to not have many pictures at all, so after some careful pondering I chose a 980 yen option, figuring that approx $15ish would be a good size meal. I also pointed to the least flurescent looking drink on the meny which gave the waitress pause for a while before she lit up and said "peach!" which sounded fantastic to me.

My meal soon arrived and turns out I'd ordered the local version of KFC, with a coleslaw on the side to keep things healthy. I don't know where the rice went, pretty sure everything comes with rice round here right?! The peach was lovely though and I left feeling pretty full, even if it was all protein and crispy coating (or "Crunky" as I saw one food product saying!).

Walking back to the hotel I was suprised at how different his part of Tokyo was to Taito, even though it is less than 1500m away. Here everything was pretty quiet, a little worse for wear and a bit run down. There were lots of old men slowly cycling past or hanging out at the corner shop sitting around smoking and mostly blocking the side street. And yet it still seemed perfectly safe, something that continues to surprise me about Japan.

Back at the hotel the thunderstorm was flashing and rumbling away and the air had that heavy feeling to it that only a thunderstorm gives. 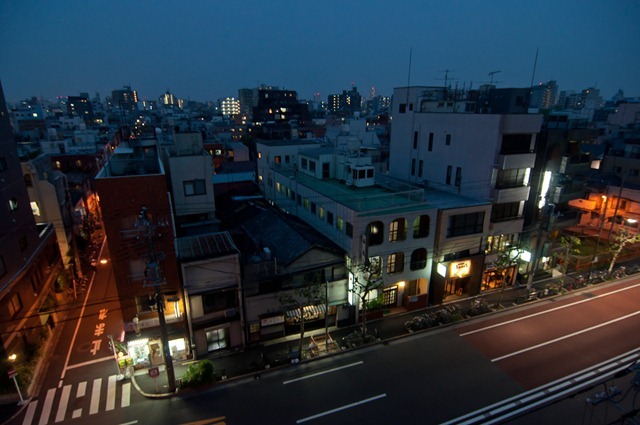 That night I consulted my travel guide (my flatmates) and formulated a plan to get to Hokkaido, as sadly I had run out of "must do" items for one of the world's biggest cities! I now had a thumping headache, no doubt heat related, and a "chlorine cough" where it felt like I'd been drinking swimming pool water (I basically had been), so hit the hay to try and sleep it off. The convenience stores here don't sell anything more powerful than a breathmint (the most popular brand being "Watering Kiss" ..?!).